A Great Performance Is All About Being In the Moment

Being both a photographer and a performer, and being connected to publications and online communities dedicated to everything from making music to producing world-class shows, I have been on my share of stages. One thing remains constant no matter which side of the fourth wall I am on–passion may not guarantee a great performance but you can’t get there without it. Great performers are great performers in front of 50 people or 50,000. This piece is a photographic journey to shoot musical performances—and much of it applies just as much to a band doing club gigs as it did to this Photo Diva staking out a prime position in the pit.

As an artist and concert photographer, my biggest thrill is when I get an image that really captures a moment onstage that will never happen again. It’s that moment when the artist onstage transcends any nerves or apprehension and embraces—even revels in—the fact they are living their dream. When the performer is in that zone there’s a joy and energy that is indescribable. As a music fan, fellow musician and artist it is truly an honor and a thrill to capture these moments through my viewfinder. Of course, it doesn’t always go that way and the obvious disconnect doesn’t escape my lens. I experienced both when I flew halfway around the world to a small town outside of Copenhagen, Denmark to shoot the legendary Roskilde Festival in June 2010 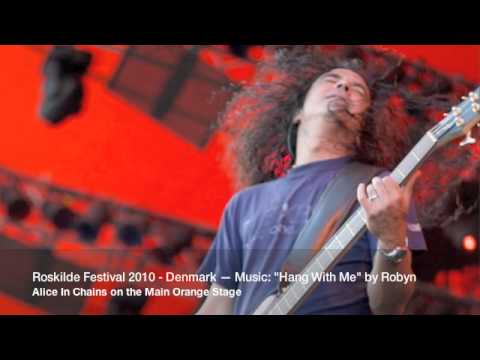 Roskilde is the typical—perhaps even stereotypical—European music festival: A week-long event where tens of thousands of festival goers camp out in massive fields under the never-gets-completely-dark Danish sky, beginning with lots of pre-concert activities prior to gates opening to the real festivities Thursday through Sunday.

So what possessed me to renew my passport, pack my camera gear and fly 5,000 miles (each way) to shoot bands that have (or will soon) come through Las Vegas where I make my home? I started entertaining the thought of going a couple of months prior. I met the sound guys from Muse and shot that show in Las Vegas. It was a huge spectacle. Their fans were so rabid that I wondered what it would be like with an audience five times larger. The idea of being involved in that kind of energy was exhilarating, but that wasn’t the turning point. The deal was not sealed until I heard who would be closing the festival. The artist formerly known as only an unpronounceable symbol: Prince.

It’s hard to put words to the depth of my Prince “fan-ism.” I had seen him perform many times but never when I would have the chance to capture it through my own lens. The Purple One—who hasn’t played Vegas since his residency at the Rio ended a few years back—is a consummate performer. Even his rep for being impossible to work with is somehow appealing. They say that the line between genius and madness is fine and Prince dances on it to the beat of a drummer that only he seems to hear. I never thought I would get the chance to shoot a Prince show. It’s unlikely he’ll play Vegas any time in the near future and even if he did, there is the whole legendary control bit which means getting access would be tough. But in a festival? Might work. Figuring that the overall event organizers would control photo access instead of Prince’s own posse I saw it as my opening and decided to go for it.

I arrived in Copenhagen the night before the festival officially opened and checked into my hotel which was just a couple blocks from the Copenhagen central train station. I know that should have made it easy but I am a “get in the car and drive Diva” and not a “what time does the #15 train arrive” type. Short and sweet: some minor snafus with train schedules and having platforms switched on me at the last second meant I had to sprint through a huge station only to miss my ride. It also meant that I did miss one performance that I wanted to shoot: Vampire Weekend who closed out the “pre-festival festivities,” and, I would have to wait until the festival was actually opening to get my press credentials. I had hoped to get that taken care of and use the night before to get the “lay of the land” so I would be in full on shooter mode when the show actually started.

Thursday morning came quickly (did it ever get dark?) and I schlepped my gear via train and a 1.5 mile walk through the town of Roskilde to the check-in area just outside the festival gates, where I ran into my first and only real hassle. I knew there was a reason I had wanted to get all official in advance. This is not my first rodeo and I knew that even being in the same city as the venue was no guarantee that everything would go smooth as planned. There was an issue with my media accreditation. Tough I had applied, and been approved, as a photographer, my credential did not include an actual photo pass. Really. I had asked multiple times prior to leaving home for confirmation and everything looked good until I got there at which point the sweet check-in girl told me that, no, my wristband did not get me into the pit.  Unacceptable.

We had a mostly civil discussion in which she explained that they only issue a limited number of pit passes. I countered by saying that I did not drag myself 5000 miles to be denied the access I expected. I won’t get into the details but she eventually saw the light (or maybe it was the look in my eyes) and switched out my pass without the need for bloodshed. Once I was finally onto the festival grounds and stowing my gear in the media center it was smooth sailing… almost.

Shooting a huge summer music festival was a dream come true but not without it’s challenges. Once I got past the complete lack of personal space (especially in the photo pits where 75-80 of us—nearly all large/tall European men—were shoved into a space smaller than most European budget hotel rooms. We were only allowed to shoot the first two or three songs (no flash) and the constant buzz of voices speaking at least six languages all at once (none of which I understood) and some equipment failures, I managed to get into the zone and shoot some of my best work.

An aside: We were maybe 10 feet away from the performers. Why did those large (and frankly, by the time the headliners were onstage, smelly) men need huge 300mm lenses? Were they trying to shoot nose hairs? And why am I the only girl here?

Since there were a total of five stages with overlapping schedules, I had to plan carefully and focus in on the acts on the two main stages. The Arena stage was a 21,100 (approx.) square-foot tented area that held about 17,000 party people. The Orange stage, the symbol of the Roskilde Festival since 1978, was a 3,900 square-foot orange tented stage overlooking an area that holds 60,000 festival goers. I got to see, hear and shoot outstanding performances by the legendary Alice In Chains, supergroup Them Crooked Vultures, Scandinavian pop diva Robyn and the up-and-coming bands Paramore and Kasabian. I also got to see, hear and shoot solid performances by mega-headliners Gorillaz (my daughter was so jealous. She actually likes these guys) and Muse (whom I thought actually performed better in Las Vegas than at Roskilde) but we all know why I was really there…

Prince…oh Prince. My dream concert shoot. The photos that would make my concert photography career take off. The intimate images of an icon that would be worthy of hanging up on the Hard Rock’s photo wall. The photos I would cherish for a lifetime…the ones that would be under my pillow at night…

Just to make sure I got the best spot possible I got to the entrance of the photo pit for the Orange stage four hours prior to Prince’s scheduled downbeat time of 10PM. But my lead time was not the issue. The issue was the sign at the photo pit entrance explaining that The Purple One had proclaimed “NO PHOTOGRAPHY” for his set. Nooooo! This can’t be! Was my dream shoot really not going to happen? Had I traveled all this way to be denied? Was there no option? Well, the security guys who I had befriended over my four days in the pit suggested I find a spot among the great unwashed and shoot from there. So screaming obscenities and hysterically sobbing, I ran out and tried to find the perfect spot…along with 60,000 other people. I fought my way through the crowds and secured a spot off center but near the sound booth and waited.

As a rabid fan, seeing and hearing Prince perform is always a thrill and he is still at the top of his game. The band (Cora Coleman Dunham on Drums, Josh Dunham on Bass, Cassandra O’Neal and Morris Hayes on Keyboards, Frederic Yonnet on Harmonica and back up vocalists Shelby Johnson, Liv Warfield and Las Vegas local Elisa Fiorillo Dease) was absolutely smoking hot. It was musical perfection but, alas, my photos were not. It’s really hard to get anything usable when you’re holding your camera with a 3 lb. lens attached to it up over your head for 40 minutes straight, basically just holding the button down and shooting blind. So my dream of shooting Prince is still largely unfulfilled.

When all was said and done, my Roskilde Festival experience remains as something I will never forget. It has changed me forever. I am a better photographer because of the lessons learned, even though my dream shoot has yet to be realized. So how different is that really from the hoped for gig that didn’t happen or the distribution deal that was so close you could feel it?

Once I got home, I had the opportunity to do an email interview with backup singer and Vegas local, Elisa Fiorillo Dease, while she was in France on the next stop of Prince’s European tour. I discovered that the Roskilde Festival experience is just as magical from the stage as it is from the audience or from the photo pit. One of her favorite moments from their set was also one of mine: their rendition of Sarah McLachlan’s "Angel” and we talked about how the line from the song that goes “Spend all your time waiting for that second chance…for a break that would make it ok" chokes us both up. (For more of the interview, go to http://living-las-vegas.com/blog/2010/07/12/touring-with-musical-royalty/ )

We are all artists…our tools of choice are the only things that are different. Roskilde was more than I could have ever hoped for. And as for Prince… I will continue to spend all my time waiting for that second chance…for a break that will make it ok.